There will be time for the extra tours from Petropavlovsk: A helicopter excursion to the Kronotski Nature Reserve (the Valley of Geysers) or a motorboat excursion to the Pacific Ocean (These tours are not included in the trip price).

The trip is designed so that you do NOT need to carry a heavy rucksack – a daypack (water, jacket, camera) only. But some walks still remain physically demanding. This is not going to be a classical trekking trip with its continuous walking and camping. Driving between the volcano areas takes quite a lot of time due to long distances and unsealed roads in remote areas. We will do our best to make the rides by our 4WD vehicle as comfortable as possible in those conditions.

Some long days and some steep ascents to the passes and crater rims. Our route follows trails but they are not waymarked nor well trodden for the most part.

The weather is not extreme at this time of year, day temperatures in the mountains are approx. +20 °C. Warm clothes are required for evening and nights. Full, lightweight, waterproofs required as some rain should be expected. Waterproof, strong walking boots with good ankle support are essential. Light weight trousers are useful for the lush undergrowth through which the route goes. Walking poles can be very useful especially for river crossings and boulder fields.​

Drive 30 km to Paratunka resort. Paratunka is a village 70 km away from Petropavlovks-Kamchatski, the most popular thermal water resort in Kamchatka. Surrounding mountains together with the hot springs form local microclimate with winter temperatures never falling down below -17 °C. The ever hot springs also allow not to construct a coal and fuel oil power station here. Local households are being heated and get hot water supply right from the hot springs. Accommodation in a good hotel with a thermal water pool. Time to relax after the flight.
Meals included: no

Today we travel northwards to the central part of Kamchatka peninsula - the region of recent volcanic activity. The last eruption took place here in November 2012. In the morning we get on a 4WD vehicle and drive to Kozyrevsk (500 km, ca. 10 hours). Stop for lunch in 300 km in the small town of Milkovo which was first mentioned in the notes of the famous Kamchatka explorer Stepan Krasheninnikov. After lunch move on till Kozyrevsk, a tiny picturesque town in the Kamchatka River Valley with only 1.7 thousands inhabitants. Accommodation in a local private guest house. Possibility to experience Russian banya (sauna).
Meals: B, -, D

Our aim today is to reach two merged volcanoes - the Plosky (flat) Tolbachik (3085 m) active volcano and the Ostry (Sharp) Tolbachik (3682 m) dormant volcano. They are so close to each other that the top of the Ostry peak is adjoining and overhanging the Plosky Tolbachik. We drive closer to Tolbachik volcanoes and to the so-called Tolbachik Dale (80 km, 5-6 hours). The road passes through the coniferous forest and the "volcanic desert" - lifeless fields of volcanic ash. Upon arrival we set up a base camp in the area of eruption of 2012-2013. In the afternoon walk (ca. 3 hours) on the lava flows of the New Tolbachik fissure eruption. Return to the base camp. Overnight in tents.
Meals: B, L, D

Today we will ascend our first volcano - Plosky Tolbachik, 3085m. Start in the early hours by crossing the congealed lava flow. Tolbachik is the only active volcano in Kamchatka which erupts low viscosity liquid basalt lavas. The ascent of the Plosky Tolbachik crater rim is technically easy, but as every ascent it requires some physical efforts and strength and will take ca. 8-10 hours to get to the top and return to the base camp. We have to gain the altitude of 3085 m starting from 1300 m. The aimed top of the volcano is a crater rim. Inside we'll see a caldera 3 km in diameter which is filled with ice. In the western part of the caldera there is an active crater 550 m deep and 1.7 km wide. From the top of the volcano there is aт impressive panoramic view of surrounding volcanoes, mountain ranges and Kamchatka river valley as well as groups of old cinder cones and new cones of the Great fissure eruption of 1975-76. Return to the base camp. Overnight in tents.
Meals: B, L, D

The Great fissure eruption of Tolbachik is different from the more typical vent eruptions as the lava is flowing out of the fissures and not from the crater. This eruption actually had Southern and Northern ruptures and lasted for 1.5 year (1975-76). As a result of the eruption, vegetation was destroyed on a large adjacent territory, lakes and streams were covered with ashes. In the morning we drive to the area of the Northern rupture (15 km, 1 hour). The northern rupture is represented by a chain of three cinder cones (330, 300 and 150 meters), elongated in the northeastern direction, with lava flows and an ash-and-lava cover of 10 sq km. The relatively flat slopes of the cones are covered with ash-slag material. On the surface there are volcanic bombs of various shapes and sizes. Here we will be able to explore the consequences of the eruption: lava flows, lava caves, “dead forest”. Return to Kozyrevsk. Accommodation and overnight in a private guest house.
Meals: B, L, D

Drive back to Paratunka with a lunch stop in Milkovo en route. Arrive in our hotel in Paratunka in the evening. Relax in a thermal swimming pool. Overnight in a hotel.
Meals: B, -, -.

In the morning we drive by a 4WD vehicle to the campsite near the Gorely Volcano (120 km, 3-3,5 hours). On the way stop on the Vilyuchinksy Pass for a great panorama of the neighboring volcanoes. From the campsite we organise a nice walk to explore the lava fields and lava caves surrounding the volcano.
Meals: B, L, D

A short drive to the footsteps of Gorely volcano (12 km, 0.5 hours). By a good path we gain ca. 900 m to reach the crater rim, 1829 m. We will walk by old lava flows and ash fields. Nowadays the Gorely massif consists of several craters surrounded by a low ridge. Each of the craters on the top of the volcano has its own characteristics, and together they create a unique ensemble. And the most beautiful and popular among tourists, of course, is the “Blue Lake” crater, because of the bright blue acid lake surrounded by vertical walls, with partially fast ice and floating ice floes. The uphill walk takes ca. 3 hours. The entire tour takes about 6-8 hours. Return to the waiting vehicle and ca. 1 hour drive to a camp near the Mutnovsky Volcano. Overnight in tents.
Meals: B, L, D

Mutnovsky and Gorely volcanoes form a huge massive with one of the most powerful thermal fields in Kamchatka (and in the world). Mutnovski is formed of 4 merged cones with the highest point of 2323 m. In one of the craters there was an eruption in 2000 which formed a blue lake and the famous "active funnel". From the eastern side of the crater there is an ice massive moving down to the crater. Powerful steam and gas jets erupt to the surface through glacial cracks. Here we can see steam and gas jets, fumaroles, framed by volcanic sulfur, above some of which there are sulfur domes. The most interesting are probably steam and mud potholes with the most actively boiling "the black pot". The uphill walk to the crater takes 3 hours (6 km), altitude gained - 800 m. The entire tour takes 7-8 hours. Overnight in the same camp.
Meals: B, L, D

The day includes a short walk to Dachnye hot springs. The locals call this place the mini Valley of Geyzers. There are several groups of springs scattered in the valley. We will see steaming and boiling bowls, fumaroles and small fountains of steam and water. In a distance there is a geothermal power station which produces power out of the thermal energy. The driving takes 5-6 hours. Overnight in the hotel in Paratunka.
Meals: B, L, -.

We spend this day in the main town of Kamchatka. In the morning we take a tour of the town with an English-speaking guide. After lunch we visit a local market. It is also possible to order a helicopter excursion to the Kronotski Reserve or take a boat tour to the Avachinskaya Bay and further on into the Pacific Ocean (5-6 hours). Overnight in a hotel in Petropavlovsk-Kamchatski.
​Meals: B, -, -. 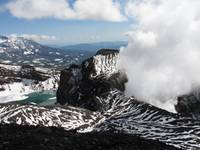