Central Asia is as geographically diverse as it is historically rich. It is a vast arena of desert, steppe and mountain ranges. For more than 2000 years Central Asia was involved in ancient east-west trade and a significant part of Silk Road was going through its territory. During this 3-week trip we will visit Uzbekistan, Kyrgyzstan, Tajikistan, Turkmenistan and Kazakhstan. All of them got their borders fixed in the 1920s as the republics of the USSR and became sovereign states after the collapse of Soviet Union.

Every country is unique because of its history, culture and traditions. Uzbek, Tadjik and Turkmen peoples have been settled for centuries, so there are many ancient cities with great architecture. It’s hard to realize that for example Samarkand is of the same age as the cities of Babylon and Rome. Its history started about 2500 years ago and has witnessed lots of upheavals during the times of Alexander the Great, the Arabic conquest, Genghis-Khan Conquest and finally Tamerlane's. Some Kyrgyz and Kazakh still follow nomadic lifestyle and while being in these countries we focus more on the nature, customs and traditions of people living there. 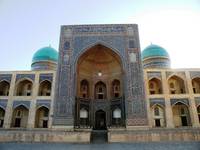